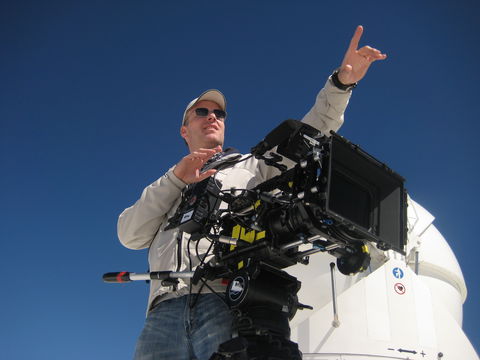 The realization of a unique cinematic vision has been the main artistic intention of Frank Mirbach's work as a filmmaker from the very beginning of his career. Mirbach worked in the music clip field as a freelance camera assistant and assistant director for several production companies before he was accepted at the Academy of Media Arts in Cologne, where he studied filmmaking and graduated in 1994. Still a student, he founded his company "Mineworks Film" in 1992, already working for several international television networks. Since then Frank Mirbach has been a sought-after producer, director and cinematographer for international broadcasters, independent film productions and commercials, traveling all over the world.

With "The Curse of the Indian Gold", one of 2005's most successful German drama documentaries, and the 2006 mini series "Mystica", a four part documentary, Frank Mirbach realized his ambition to tell fact-based stories in a visually compelling, highly cinematic way. He continued his documentary work with the successful GEO documentaries "B.C. Loggers" and "Reduce the loss of life - the Irish Coast Guard" in 2009 and 2010 for the German/French network ARTE, which were among the first docs to be filmed with the RED cinema camera. Among several highly-acclaimed productions, he served as cinematographer for Steve Hudson's "I Always Wanted", their first collaboration, where his mastery of the cinematographer's art was crucial to the film's iconic feel.

His current work includes "Snow Wars", a prime time documentary about British Columbia avalanche techs in their fight against the snow masses for which he was awarded the coveted Remi Award in Gold at the "Worldfest Houston Int. Filmfestival" and "The Mosaic of Life", about Holocaust survivor Jack Brauns, where he collaborated with acclaimed cinematographer Rodney Charters, ASC (24, Shameless, Dallas). He is the producer and director of the movie "Real Buddy" (real-buddy.com), a science-fiction satire to be released in 2015.
Mehr anzeigenWeniger anzeigen