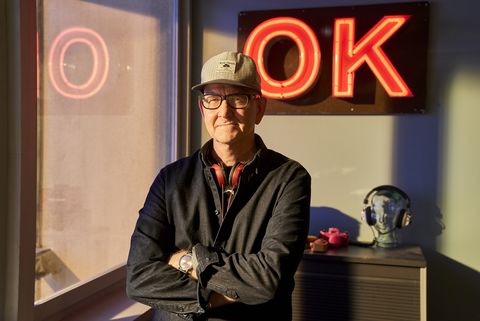 Oliver Schmitz studied fine arts in Cape Town, at the same time joining a collective that ran a cult nightclub SCRATCH . It became a legendary club that beat Apartheid segregation laws and nurtured a generation of creative and rebellious youth.

Schmitz made his first feature, MAPANTSULA in 1987. It is the prominent anti-Apartheid cinema icon of the time and Schmitz wrote a fake script to elude police and censors. Mapantsula has been taught in Film Studies in many universities, including Columbia University in NY, Bristol and Wits in Johannesburg.

He has made five movies for cinema, four of which have premiered in official selection in Cannes - one being the Parisian omnibus film PARIS JE T’AIME(PLACE DES FETES)(on Itunes/Apple Tv).

LIFE ABOVE ALL(GELIEBTES LEBEN/ LE SECRET DE CHANDA)(on Itunes/Apple Tv), made it onto the Oscars shortlist for Best Foreign Film(2010) and won the jury prize at the Dubai International Film festival(2010), also winning the Francois Chalais award at Cannes.

SHEPHERDS AND BUTCHERS (2016)(on Netflix/Amazon Prime) with Steve Coogan and Andrea Riseborough, premiered at the Berlinale 2016, where it won an audience award and Best Directing at the South African Film and Television Awards.

He also has an active television career, directing, amongst others, the award-winning comedy series TÜRKISCH FÜR ANFÄNGER(on Netflix) and DOCTOR’S DIARY, winning respectively, Best Series, at the German Television Awards, the German Comedy Awards and a prestigious Grimme Prize. He directed the first episodes of the ZDF primetime comedy series DAS PUBERTIER(on Amazon Prime) and the pilot for popular RTL series, ST.MAIK( nominated for the German Comedy Prize).

Television movies include all five films in the ALLEIN UNTER series with Hannes Jaenicke (nominated for Best Actor, Bavarian Film Prize 2015) and FAMILIE OHNE GRENZEN with Richie Müller and Lisa Martinek (Nominated for Best German TV film at the Jupiter Awards in 2014).

In 2018 Oliver partnered up with Aaryan Trivedi to form WTHW (what the hero wants). They have developed the screenplays BUGS AND DRUGS , 418 ( co-produced by Gaumont Germany), BOOKS AND BULLETS and COME TOGETHER(WT) With Dreamer Jointventure and Blueskin Films..

Currently, he is in pre-production on THE OUTSIDE ROOM ( based on the novel AGAAT), starring Vanessa Redgrave, Lashana Lynch, Emily Beecham and Sverrir Gudnason.
Mehr anzeigenWeniger anzeigen