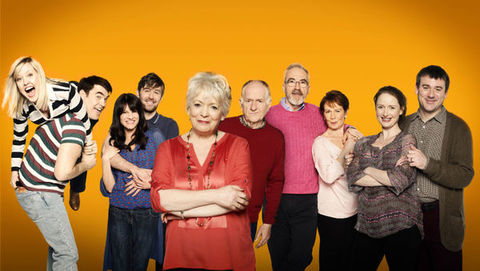 Bearbeiten
Love and Marriage is a comedy drama about the big love which binds the sprawling and chaotic Paradise family.

When Pauline Paradise retires from her job as a lollipop lady and returns home, she looks around to see what her future holds and doesn’t like what she sees. A non-communicative husband (‘Silent Ken’) and the endless demands of her beloved, adult children and their offspring. So this quintessential family woman the matriarch of the family and everybody’s rock decides to walk out on her life. She doesn’t go very far though just a few roads away to live with her sister, Rowan, who’s led a very different life to Pauline. As young women, Rowan married ‘up’ and Pauline married ‘down’. Pauline fancies a bit of what Rowan has and sets about getting it but is it as easy as that? The series explores the aftermath of Pauline’s decision, along with the knock-on effects it has on her three adult children – it shakes their worlds and makes them look differently at their own idiosyncratic relationships… with explosively funny and emotional consequences