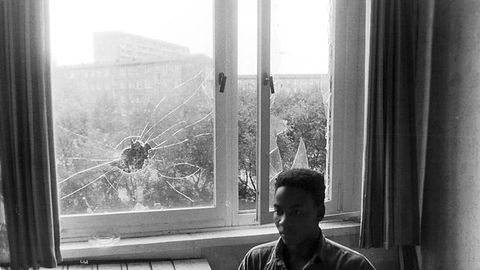 Edit
In September 1991, seemingly out of nowhere, a public agitation breaks out in Hoyerswerda. A steadily growing crowd of "ordinary citizens" and neo-Nazis lay siege for a whole week to the home of GDR contract workers from Mozambique and Vietnam and the central accommodation for asylum seekers from Eastern Europe. The crowd breaks windows and explodes incendiary devices. In full view of the public, the attacked people hide in fear of their lives, the police forces are overwhelmed, the pictures of the applauding crowd go around the world.

The authorities see no other way out than to evacuate the foreigners from the city. 32 people are injured, 82 arrested, only four convicted. In right-wing circles, Hoyerswerda is dubbed the first "foreigner-free" city in the wake of the riots. The term "free of foreigners" is subsequently voted the first "Unword of the Year" in 1991. It is a caesura for Germany and the prelude to a wave of right-wing violence in the early 1990s.
On the second day of the riots, incendiary devices increasingly fly against the contract workers' hostel. The police are without special protective equipment and can only fend off the attackers with difficulty and with the help of the service dogs.

The film "Hoyerswerda '91 - A city, violence and its reappraisal" reconstructs the chronicle of the events of those seven days in September and their causes. On the other hand, it will take a look from today - 30 years later - at how the Fanal has been dealt with up to the present day. Hoyerswerda has struggled to recover from the stigma of 1991, and since reunification it has been a battered city whose population has shrunk from 70,000 to just under 30,000.
What traces have the events left behind?

The film takes a look at three generations of "Hoyerswerdians" and looks at what traces the events of September 1991 have left in their lives and what they themselves have done with this legacy. In addition, the film will also increasingly tell the story from the perspective of the victims at the time, which has remained mostly untold over the past 30 years. The film also reconstructs the disastrous crisis management of the Saxon authorities at the time against the background of the asylum debate at the time.

Already in the spring of 1991, the harbingers of the wave of violence that would break out in the autumn were unmistakable. In the month of May alone, Saxony recorded one third of all right-wing extremist acts of violence recorded in Germany, without reacting adequately to them. For the film, various people involved at the time and contemporary witnesses recall the time of reunification, the riots in 1991 and how they dealt with them in the following decades: There is David Macou, who lived in the GDR for twelve years as a contract worker and had to return to his native Mozambique overnight. The police officers Jörg Schwirtznik and Rainer Schölzel, who were completely overwhelmed on the ground as patrolman and hundred-man leader of the riot police, respectively, and felt largely abandoned by superiors and politics.
Grit Lemke, who grew up in Hoyerswerda, in front of the last remaining block of what was then a contract workers' hostel. She lived in the same street and was taken completely by surprise by the attack in the neighbouring youth club "Der Laden". She has now written a book about her childhood and September 1991, which will be published in September: "Kinder von Hoy".

There is Grit Lemke, director and author, who grew up in Hoyerswerda, experienced the riots at first hand and eventually left Hoyerswerda because of the dominance of the right-wing. Today she laments the prolonged silence and the lack of confrontation within the city. Among others, Gerhard Gundermann, the "singing digger driver" who commented on the events in numerous television appearances at the time, also has his say in archive recordings.
Show moreShow less