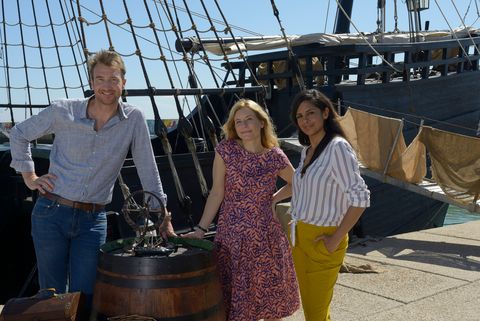 Edit
A SUMMER IN ANDALUSIA
Summary
When PIA and JOHN met each other at the airport half a year ago, both were on their way back home. Pia to Germany, John to New Zealand. While looking at and talking to each other in the duty free shop it clicked between them. Head over heels they agreed on meeting again six months later at the Upper Rock of Gibraltar.
This is where the story starts. It’s now six months later: Pia arrives at Gibraltar but there’s no John. She is only acompanied by FLORA, the friendly taxi driver who brought her here. On the way from Sevilla airport to Gibraltar Pia had enough time to tell Flora her romantic and vibrant story of her „New Zealand-stranger“. But Pia’s romantic feelings evaporate quickly when she accepts, that John didn’t come. It doesn’t matter why. It is a fact, he isn’t here… the reason could be Pia being four hours late because of a delayed flight or John who maybe got married meanwhile or John simply took everything as a joke six months ago???
Flora isn’t able to cheer Pia up, but she offers her a lift to Cadiz (for free), where Flora is invited to a wedding of friends of her to perform a Flamenco dance. Pia can come along with her if she wants. Pia accepts, since flying home isn’t an option anyway. At the wedding party, Pia meets DIEGO, an attentive, smart and exciting character. Both get along with each other very well and Pia has an adventurous night with Diego as he shows her, what he does in his free time and out of commitment: he is fighting the injustice of the forced evictions. His Robin-Hood-style capers are admirable, but have also gotten him into trouble with the local police.
Pias holiday seems to be saved. Just when she starts to enjoy the time with Diego, John suddenly shows up… in Ronda of all places. John is, in his own very individual way, also a very nice guy and after all, he did come all the way from New Zealand to Andalusia to meet Pia again. Even though it breaks her heart, she has to tell Diego the truth about John and their previous made arrangement. Diego pretends that he doesn't care that much and doesn't want to be in the way of Pia's plans with John.
As she spends time with John, she genuinely begins to like John as well. Now Pia is torn between these two men who are totally different. By the end of this five day holiday, Pia will have figured out, who the right partner is for her. And, she will have learned a lot about herself and about what she wants and needs in life, privately- and professionally.
Show moreShow less