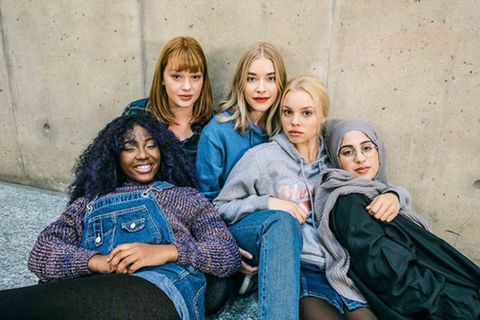 Edit
"DRUCK" is the German adaptation of the Norwegian hit series "SKAM" by author and director Julie Andem. The horizontally narrated series, which is aimed at 14- to 20-year-olds, covers all the important topics of this formative phase of life: first love, friendships with all their ups and downs, the pressure to perform at school, outings, the increasing separation from the family or even bullying. The contents should be authentic and close to the target group's attitude to life. In order to present the characters as realistically as possible, the personal skills and hobbies of the largely unknown young actors were integrated into the plot.

The first season of "DRUCK" focuses on 16-year-old Hanna. Until recently, she was one of the most popular girls at school and the focus of her clique. But ever since she stole her best friend Leonie's boyfriend, she's been left on her own: Only her boyfriend Jonas and his best friend Matteo still stick by her. Little by little Hanna meets Mia, Kiki, Amira Thalia and Sam from her year. Although the girls are fundamentally different and have different values, they slowly become friends. But then Hanna's relationship with Jonas is suddenly on the brink: She learns that he still has secret contact with Leonie.

In the second season, the girls' crew of Hanna, Mia, Kiki, Sam and Amira revolves around the emotional world of smart Mia Winter. She is a self-confident and feminist young woman who fights for independence in the harsh reality of everyday life in the upper school and doesn't put up with anything from men - if it weren't for Alexander, who makes sure that Mia loses her inner compass more and more: Isn't the heart in reality just a manipulable, unreliable organ that gets you in deep shit?

In the third season everything will be different, because now it's all about the boys' emotional world. The clique around Jonas, Matteo, Carlos and Abdi has to prepare for high school graduation, but friendships, sex and the first big love always keep them from doing so. But do you prefer to act cool and keep your feelings to yourself, or is it worth risking everything and maybe getting really hurt?