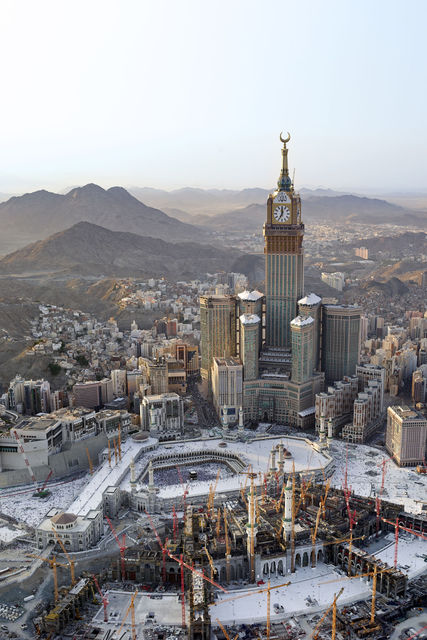 On August 19, 2011/1432H during the last days of the holy month of Ramadan, the Custodian of the Two Holy Mosques, King Abdullah Bin Abdul Aziz Al Saud, inaugurated a masterpiece of engineering ingenuity in the Holy City of Makkah: the biggest clock in the world directly next to the Holy Ka`ba. It contributes to the worldwide scientific community as a member of the Universal Time Coordinated (UTC) and serves Muslims all over the world with the Makkah Time.

Bensalem Bouabdallah’s stunning documentary The Makkah Clock explores the engineering breakthrough behind the development, fabrication and installation of the largest clock ever built. Each of the 4 clock faces is 43 meters in size. One of the clock drives weighs over 21 tons. The Makkah Clock Tower is 607 meters high and currently the second tallest building in the world.

Shot over the course of 4 years in 10 countries across Europe, in the Middle East and the United States, it tells the astonishing story from the initial idea to the inauguration of one of the most innovative construction projects of the 21st century.

Along with its partners, the German SL-Rasch Institute for Scientific Architecture faced some unusually big challenges: the high-rise building was already under construction when it was decided that the central tower should be crowned with an impressive Islamic-designed clock that should be visible from over 7 kilometers. The original 450-meter-high building, however, was not designed to support a 150-meter-tall addition. Undeterred by this, the specialist engineers and lightweight experts of SL-Rasch came up with a unique and groundbreaking solution.

The documentary The Makkah Clock reveals the Holy Site in Makkah in a way that has never been seen before and not least proves the eternal unity of science and Islam.
Show moreShow less