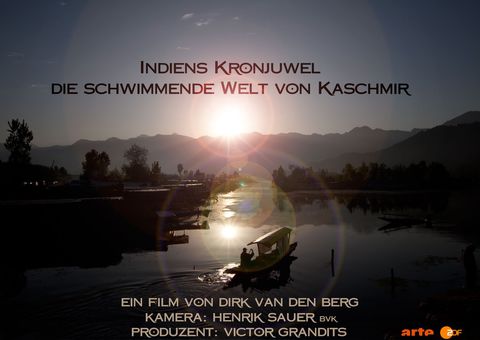 Edit
The Kashmir valley lies in the northwest of India, at an altitude of 1,600 metres and surrounded by the peaks of the Himalayas. Numerous rivers springing from the mountains create a labyrinth of watercourses, floating gardens, islands and lakes over millions of years. At its centre is the Dal Lake, also known as the "Crown Jewel of Kashmir".

With the first rays of sunlight of the day, wooden, colourfully decorated Shikaras, gondola-like long boats, enliven the Dal Lake. Ali Mohammed Bhat is the protagonist leading through this documentary. With him, we experience the exotic everyday life of the Hanjis, the "boat people" who live with and on Dal Lake.

The region is strongly influenced by the different peoples who settle on the lake. Over centuries, a unique cultural landscape has developed and with it traditions such as the craft of walnut carving and the artistically decorated houseboats, which are often used today as hotels.

The war between Pakistan and India at the end of the 1980s made the Kashmir Valley a dangerous place for tourists for a long time. Only now, the region is slowly beginning to recover. The long years of unrest severely weakened the region's economy and infrastructure. What is almost worse is that the Dal Lake and its surroundings are threatened by an ecological catastrophe due to the lack of sewerage and over-fertilisation of the surrounding fields.
Show moreShow less