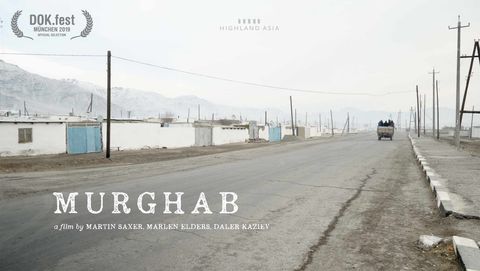 Edit
A generation ago, Murghab was well taken care of. As the highest town of the former Soviet Union at 3600 metres above sea level and close to the sensitive borders with Afghanistan and China, the town enjoyed ample provisions from Moscow brought in via the Pamir Highway. It featured electricity around the clock, an airport with regular flights, a movie theatre, and a hospital with central heating. Since then, Murghab and its people have weathered several storms and many of the Soviet hallmarks are crumbling away. Yet, life goes on and, with wit and improvisational skills, the ruins of Socialism afford a plethora of new but precarious ways to make do.

The film provides a window into contemporary life in Murghab. It offers glimpses into people's daily routines, inviting the audience on a journey to the Pamirs. It follows a group of men harvesting shrubs on the windswept high-altitude plateau, a nurse keeping regional health statistics, a passionate teacher inspiring a sense of history and purpose in her class, and a welder building stoves from the scraps of Soviet modernity. A winter film of hardship, work and hope.
Show moreShow less