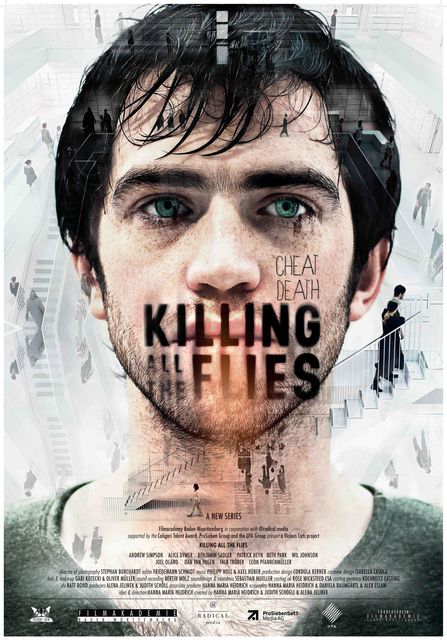 Killing All The Flies

KILLING ALL THE FLIES is a new sci-fi-thriller series about fate, justice and life after death.
What if you could bring the dead back to life? How far are you really willing to go for the ones you love? And how much would you pay to escape your own death? LEVIN REID, a 23-year old police cadet wakes up soaked in blood next to his dead girlfriend MARIE. Levin loses not only the love of his life but is even falsely accused of her murder. Helpless in the face of overwhelming evidence, Levin escapes his arrest and is determined to find the true murderer. The results of his girlfriend‘s research as a journalist are the only lead he has. Slowly, Levin begins to understand the magnitude of the events and finds himself facing a conspiracy on a scale no one could have imagined: The corporation has successfully bypassed death through a clever medical trade system. They sell eternal life to wealthy clients at the cost of innocent victims. Yet if there is a possibility for the corporation's clients to overcome death, there must also be a way to revive his girlfriend Marie back to life. At this point, Levin is ready to take any risk. He declares that he is not going to stop until he has reversed all the corporation‘s death-trades and has brought his love Marie back to life.
Show moreShow less