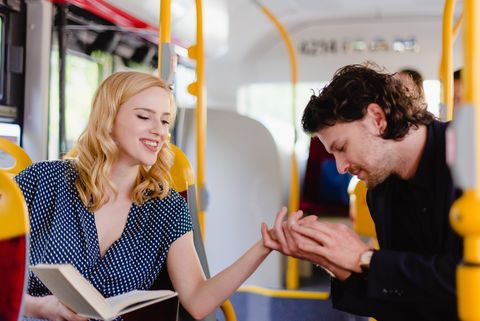 Feature Film | 2020 | Comedy, Romance | Poland
The project "Gorzko, gorzko" has been editorially approved, but continues to be regularly reviewed, updated and supported through to release by our editors. Please inform us of missing, false or outdated data.

Edit
An accidental meeting with a beautiful stranger turns the life of Tomek (Mateusz Kościukiewicz), an ace advertising executive, upside down. Instead of signing a lucrative contract, he loses everything overnight: his job, his apartment, his fancy car. Faced with a no-win situation, he moves in with his brother Janek (Rafał Zawierucha), a recluse and computer freak in love with Klara (Agnieszka Więdłocha), a florist.

Tomek, a seasoned pick-up artist, proposes a deal to his brother. He will help him with his amorous conquests if he finds a stunning stranger. A little hacker magic and the girl is found. Her name is Ola (Zofia Domalik) and in exactly two weeks she is getting married, to the son of the Minister of Justice! There's not much time, but Tomek doesn't hesitate to get into the game. Using all his charm, he sneaks into the good graces of the minister's wife (Edyta Olszówka) and makes her a cunning proposal. He offers to make a film with his brother about the preparations for her son's wedding.
Show moreShow less