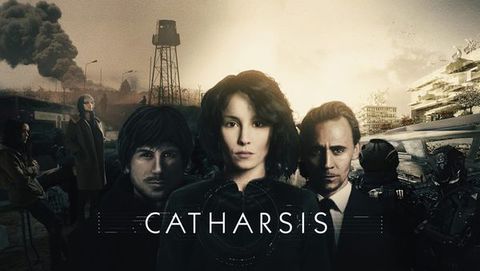 Edit
Berlin in 2035: Security agent Carla Schwarz is in dystopian Berlin in search of her sister.

An attack is committed and one of Germany's most important economic figures dies.

But instead of catching the assassin, agent CARLA SCHWARZ helps him escape. A calculated act: She wants to sneak into the environmental activist group PARADISE to find her sister. All indications suggest that DAVID FÜHRMANN, leader of Paradise, has something to do with the disappearance of the sister 18 years earlier. Carla needs David's trust - at all costs.

Carla lives in a love affair with the son of the CEO of SECURENOW: MARIAN KRUG. Marian embodies the conscience of SecureNow. He believes that the company can do good for the community and does not have to be just a security apparatus of economic empires. But his father is opposed to this. He fears for power, money and influence.

As the environmental activists' trust in Carla grows, SecureNow begins to doubt their loyalty. Which side is Carla on?

Finally, something monstrous is happening: Marian is the murderer of her sister. Carla decides to change camp and seek revenge. The agent turns into a terrorist. But in the meantime, Marian has become the most powerful man at SecureNow and thus an important negotiating partner for the activist group. Marian promises the social change that people have been hoping for for so long. What will Carla do?
Show moreShow less