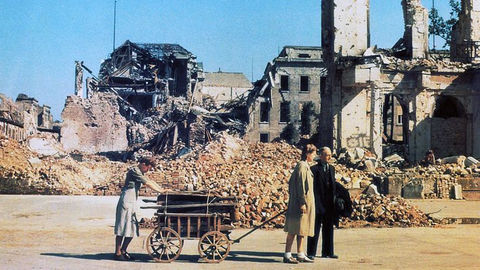 Edit
Berlin 1945 time-travels in cinematic style into the city’s most fateful year through the eyes of those, who experienced it: the German population and Allied soldiers.

Berlin 1945 tells the story of liberation, defeat, and reconstruction in a city transformed from a theatre of war into a field of ruins. Through the eyes of the victors and the vanquished, Berlin 1945 reveals a multi-layered transformation of a city and its inhabitants. With surprising, never before seen archival footage, we reconstruct the lives not only from those liberated from concentration camps and occupied countries, but also from Germany’s followers, silent masses, and perpetrators. We create a fast-paced collage of testimonies from this period, giving voice to Soviet, US, UK and French soldiers as well as the German population anxiously awaiting the outcome of the fighting.
Show moreShow less