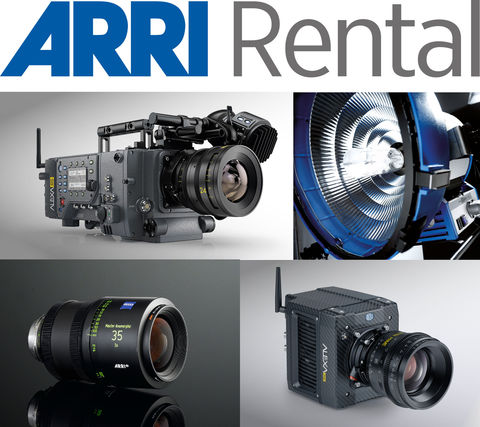 Forming part of the global ARRI Rental group, ARRI Rental Europe is headquartered in Munich and has facilities in four other German cities, as well as in Vienna, Luxembourg, Budapest and Prague. From these locations across continental Europe - and in close partnership with ARRI Rental USA und ARRI Rental UK - it can support and supply productions of any scale, shooting anywhere in the world.

The camera rental division provides the film, television and commercial industries with cutting edge camera equipment in every professional format, including diverse digital and film based options, and state-of-the-art 3D technologies.

Dollies, cranes, remote heads and specialist camera vehicles can be supplied and operated by the grip department, while the lighting department offers a full range of lights, accessories and the latest generation of super-silent generators – not just for film and television productions, but for all kinds of live events.

ARRI Rental Europe does more than simply provide equipment; it also offers competent consulting and logistical support. Over many years it has gained experience on the demanding and logistically complex shoots of major international and national productions.

With all of ARRI’s worldwide rental facilities having united under the single brand of ARRI Rental, you can be certain of a consistently high standard of equipment, service and support wherever you need to shoot. The group’s combined expertise and resources have allowed it to develop exclusive, proprietary technologies; these include the ALEXA XT B+W black-and-white camera and the ALEXA 65, a large-format solution for high-end theatrical motion pictures, comprising a 65 mm digital cinema camera, custom-designed prime and zoom lenses, and fast, efficient workflow tools.

No matter how large the production and how remote the location, ARRI Rental can provide unbeatable technology and service to the right place at the right time.