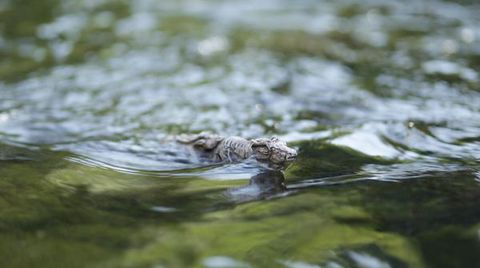 A Horse with Wheels

Edit
“Once there was a man, alone in his car, driving down a highway at dawn. His mind was sliding between the states of concentration and relaxation.Then slowly he was approaching another car which was pulling a horse trailer. “A horse!”, he thought, “A horse with wheels! Riding at a hundred kilometers an hour!” He burst into laughter. “Why do we put wheels on a horse?”, he thought, “How strange we are!” This man was me, your filmmaker, and this moment was the beginning of this film.”

These are the narrator’s opening lines in A HORSE WITH WHEELS. In an essayistic style, this video attempts to reconnect us with the maker of mankind’s first piece of art, it’s first known “useless tool”. Carved in the last Ice Age, 13.000 years ago, out of a mammoth tusk, the almost unknown object “The Swimming Reindeer” shines a light on an outstanding step in human development: the arrival of art and the modern brain.

Shot in Ice Age caves in France, within a herd of 1000 reindeer in North-Norway, on the glaciers of Iceland, the vast landscapes of Scotland, and a museum in Germany, A HORSE WITH WHEELS tells the story of a journey and a seemingly impossible approximation: how can we get closer to this ancestor who made the first art object? Does it help to see the same images? Have we changed at all since the Ice Age, or is progress a deception? What do we know about our past and why do we want to believe that our ancestors were primitive? Is a camera so different from a carving knife? The “Swimming Reindeer” are a reminder of the last global warming that humanity had to survive. Was this mayor human crisis the trigger for the invention of art?
Show moreShow less