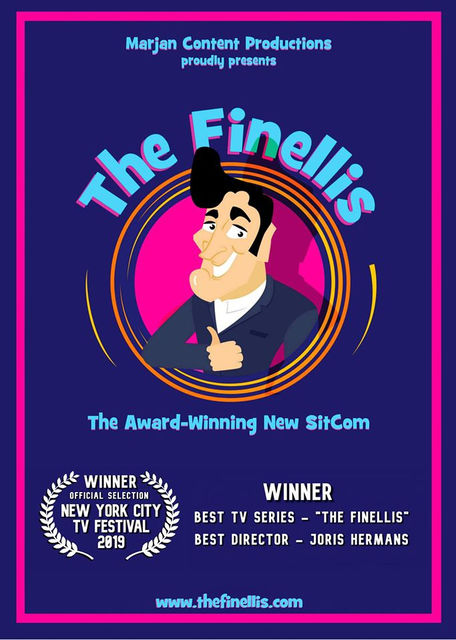 Bearbeiten
"The Finellis" is a new American Sitcom, filmed in and around Berlin developed for the international television marketplace. It is a unique mix
of a traditional SitCom with both Live Musical performances and animated sequences.

After taking the fall for a Mafia Boss, and spending 15 years in jail for a crime he did not commit, Tony Finelli, a star from the 1990s tries to rebuild his life and music career while reconnecting with his Ex-Wife and (now grown) children.

In the 1990s, Tony Finelli, an Italian-American from New York (Mark Janicello) was a star in Europe. Tony found fame playing the King of Rock and Roll in "ELVIS: The Musical" and together with his ever-present Manager, Jürgen, turned that initial success into an international singing career.

In 1997, Jürgen was contacted by an undercover German CIA Agent posing as an “Italian Concert Promoter” representing "Mr. Big," Godfather of the Gambaretto Mafia Family.  Tony and Jürgen inadvertently get caught in a sting operation to arrest Mr. Big for both tax evasion and money laundering.  In order to save their families from a mob hit, Tony and Jürgen took the fall for Mr. Big and though innocent, spend 15 years in Berlin's Moabit Prison.

“The Finellis” begins on the day of Tony and Jürgen's release.  No one meets them at the gate.  Tony returns to his mansion in a well-to-do Berlin neighborhood to rebuild his life and career.  Unbeknownst to Tony, shortly before his release, Tony's wife Tina, a former Model and Stewardess from Russia, filed for divorce.

The scandal surrounding Tony's arrest ruined Tina's reputation and left her with no income.  To survive, she turned Tony's mansion into a bed and breakfast.  Now, as the owner of Tony's former home, Tina lives there with their two daughters, Lola, and Lena (now 27 and 20 years old).  Although Tony still has a good relationship with is oldest daughter Lola, his youngest daughter, Lena, can barely remember him.     Occupying one of the upstairs apartments are Tony's parents, Pete and Bea Finelli as well as his ancient, slightly-demented Sicilian grandmother „Nonna.“  In short, numerous generations of Finellis are living under one roof.

Recently, the Superintendent (Janitor) in Tina's bed and breakfast quit.  To earn some money, as well as to buy some time with Tina, Lola, and Lena while trying to rebuild his career -- Tony, the Italian Divo, takes over the Janitor's job.  Between Tony's “Divo Attitude” and his two left hands, he's a pretty rotten Janitor.  When you add to that the cultural and generational differences between the Americans and Europeans, you create the comedic chaos that is "The Finellis."
Mehr anzeigenWeniger anzeigen