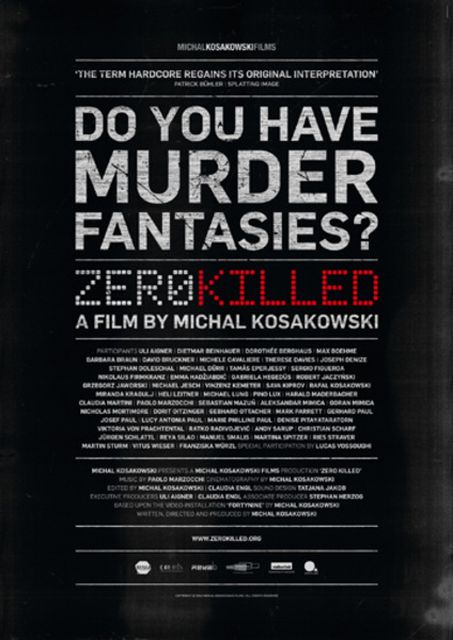 Bearbeiten
Since 1996 film director Michal Kosakowski has been asking people with different backgrounds about their murder fantasies. He offered them the chance to stage their fantasies as short films. The only condition was that they had to act in these films themselves, either as victims or perpetrators. More than a decade later, Kosakowski met these people again to ask them about their emotions during their acts of murder or victimization, and interviewed them about current social topics such as revenge, torture, war, terrorism, media, domestic violence, the death penalty, suicide etc.

If someone murdered a person you love, how would you feel about it? Should torture be legalized? Are soldiers murderers? How to define good and evil? Their replies are juxtaposed with the short films based on these ‘non-criminal’ fantasies made accessible to viewers. Simultaneously, the participants’ respective replies help viewers to get better acquainted with them and their highly diverse social and professional backgrounds. It is the banality of their acts that frightens us so badly, their stabbing of innocent people, their orgiastic throttling of marriage partners or their random shooting of unsuspecting visitors to exhibitions.

‘Zero Killed’ takes the issue one step further: the film deciphers common clichés and patterns of visual violence with the aid of the protagonists’ immediate and direct comments.

The result is an unconventional hybrid of feature film and documentary that makes viewers question their personal and social positions concerning ethical and moral values and taboos.
Mehr anzeigenWeniger anzeigen