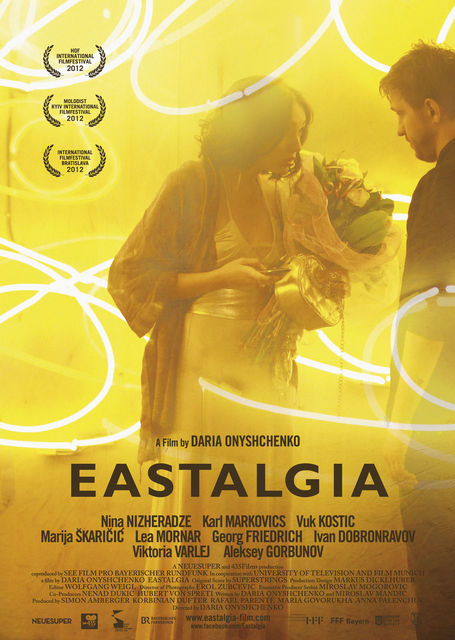 Bearbeiten
RUSLANA, a middle-aged Ukrainian, lives a lonely life in Munich. Just when she fails her German exam yet again a broken pipe in her self-made “Samogon”distillery floods her modest home, her luck changes when her serbian neighbor VLADAN, comes to her rescue and overcomes her language barrier with his Slavic soul. Having given up his boxing career to start a new living in Germany for the sake of his ex-wife, he now has been left with nothing after their divorce.
Bogdan, Ruslana’s son, has been working as a driver for spoiled Ukrainian pop-singer MARIA in Kiev. Both rely on her rich patron JORA. Bogdan is sick of them both, throws in his job and leaves Maria stuck in a traffic jam. He goes for a last drink with his friends before leaving for his mother. Drunk and jealous he turns back at the station and passes Maria at the concert venue.
ZORAN, Vladan’s son, has returned to Belgrade, where together with his girlfriend AIDA, he lives a simple but satisfying life. When he witnesses local mafia pressing “farewell” money, he meets JELENA, the indecisive but loveable wife of the Austrian restaurant owner GÜNTHER. But Jelena intends to leave her homeland the next day, forever. (http://eastalgia-film.com)
Mehr anzeigenWeniger anzeigen