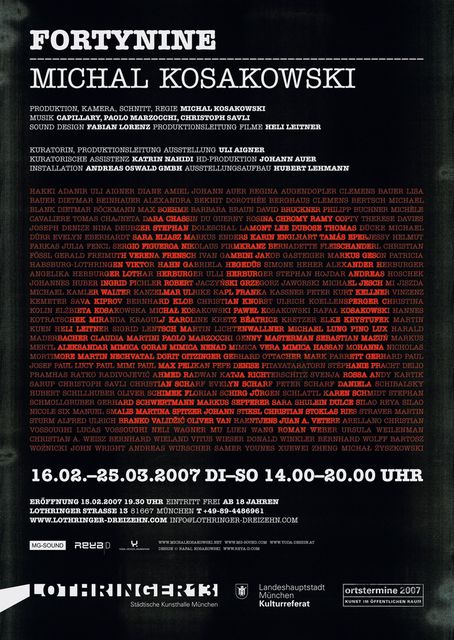 Bearbeiten
Between 1996 and 2006 Michal Kosakowski produced 49 short movies on the subject of killing. 49 killings, dreamt up by inhabitants of the metropolis of morbidity – Vienna. In 1996, Kosakowski began to inquire into fantasies of killing – at first among his relatives and friends, then widening the circle to include artists, musicians and, eventually, actors.

Within a decade, Kosakowski made 49 short movies, an essential element of which is the fact that these killing fantasies were put into practice with the complicity of the respondents themselves and depicted in the 49 videos. The collaborations between Kosakowski and his fictitious killers and victims in scripting, acting and staging the films could not have been closer or more intense. Michal Kosakowski himself was in charge of directing, camera, editing and special effects for all 49 films.

The fantasies of violence, all of which seem to feed on the explicit violence omnipresent in film and television, are stunning. Not a single one of the 160 performers has a criminal record or was ever involved in any real acts of violence. And yet poisoning, torture, suicide, execution, ritual murder, violence by and against women, men, and children, murders motivated by sexual, political, and mental aberration come face to face with the recipients’ emotions, naked and uncensored.

What Michal Kosakowski grants us is the rare occasion to experience a genuine taboo of our times and our Western society – death. A death that, for the time being, seems to present itself exclusively in the contemporary guise of the incessant violence staged by the media
Mehr anzeigenWeniger anzeigen