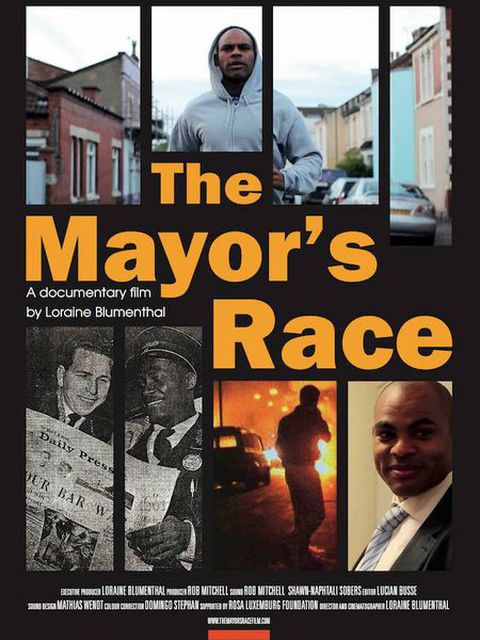 Bearbeiten
A film about a man who rises from a Bristol ghetto to shape himself into the powerful political figure in this Western European city.

Marvin Rees is a ‘mixed race’ man in his 40’s. Having experienced poverty and racism in his life, he wants to shape the society he lives in and believes political office will give him the power to do so.

In 2012 he runs for mayor in Bristol, UK. The journey into politics hits him with rejection, failure and an inner struggle that eventually leads to the biggest challenge of his life. THE MAYOR’S RACE is about the desire to overcome doubt and the boundaries between social background and power.

Marvin Rees grew up as a mixed-race child in Bristol’s ghettos in the UK, which meant living with prostitution, violence and poverty around him. For a long time, Marvin has wanted to fight the injustices he experienced and so he decides to run for mayor of his city. As an amateur, he steps into the world of politics. Yet, despite his charisma and intellect, his biggest battle is believing anyone will take this black guy from the ghetto seriously. It’s a tight race and he is forced to accept the loss in front of rolling cameras. Feeling personally ashamed, he is also aware that losing has a wider significance. In a city which carries a history of exclusion and racism, people like him feel the echoing of it until the present day.

Bristol was part of the slave trade and at the centre of a UK civil rights campaign in the 1960’s, inspired by Martin Luther King. The city saw black youths uprising in violent battles that sparked riots across the country in the 1980s. Today it is a rising fear of Muslims that shatters the Bristol’s unity. Despite his doubts, Marvin decides to run again. More professional, stronger and with the vital support of the Muslim community. Will he manage to break the circle of history and become the first mayor of African descent of a city in Europe?